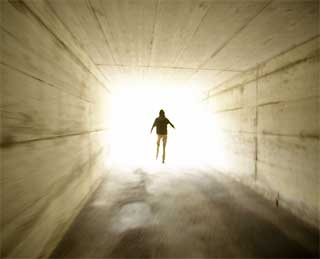 I recently had to write a paper for my ordination course on my personal spiritual journey and my call to ministry. Most of it is all information I've shared here on my blog at one point or another but some people said they were interested in reading it, so I'm going to go ahead and post it since I haven't really had any time to blog lately anyways:

When did my spiritual journey begin? It’s hard to pinpoint exactly when as I grew up in a conservative Christian home that frequently had me attend church, Sunday school and Bible schools. I would say around the age of seven is when I started to embark upon my spiritual journey by reciting the “sinner’s prayer”. At the time though, it was only an acknowledgement that I didn’t want to go to this scary “Hell” place I was hearing about, so there was yet to be a heartfelt desire to actually follow God. I would spend the next few years recommitting my life to Christ through many prayers and being a bit unsure where the whole Christian religion was to fit in my life. Then around the age of twelve, I heard a sermon titled something to the effect of “getting real with God” at a church summer camp. I don’t recall much the content of the message but by the end of it I just decided it was time for me to know God intimately, rather than just call on him whenever I felt unsure about my afterlife destiny.

After that point, it was clear that something in me had really changed. I remember a few days later after I came back home, sitting on my friend’s lawn just staring at the sky feeling a spiritual “high” so to speak. Knowing that the Lord of All loved me, accepted me and wanted to use me was quite the over-powering feeling. I would evangelize frequently to my friends at school (often to the point of unintentional annoyance) and I’d even find random people on the internet solely to inform them how Jesus could change their life and save them from everlasting punishment. Even though I was a shy person, I took Jesus’ call for us to “go and make disciples” seriously.

Some years passed and I started to give up on evangelizing due to how few people I had actually led into the faith. Sadly, as a result my own faith took a back-seat for awhile and I didn’t focus on it as much. I still believed deep down inside but I didn’t feel the passion for ministry that I once did and I didn’t feel as close to God either. It wasn’t long though before this started to bother me, and through the conversion story of Brian “Head” Welch (formerly of the rock band Korn) I remembered the power of a life transformed in Christ. So one night I simply prayed that God would give me such a love and a passion for Him and others like I had before.
Almost immediately, my interest in faith matters was rekindled and I could feel God’s presence again in an exciting way. Yet there was something else that soon came along with it: honest doubts. Perhaps they were doubts I always had tucked away in a corner somewhere in the past, or perhaps they were just things I never thought about much before? Either way, I perceived them as being from Satan himself because they cut at the core of things I always believed and told others about.

These doubts included many aspects of my faith but mostly involved the idea of a never-ending Hell for those that died without accepting Jesus as Lord and Savior. I had always told people previously that God had to send people to Hell (or rather, allow them to send themselves there as the cliché goes) in order to be “just” and “holy”; but that reasoning no longer seemed compelling to me. It no longer made sense to me that there could be anything “just” or “holy” about endless torments befalling anyone for any reason; let alone mistaken beliefs about God or his way of salvation. And no matter how many pastors or Christian friends I talked to, the idea continued to feel wrong in my soul.

It was around this time however that I had come into conversation with some of my online friends about an idea called “universalism”, the belief that everyone eventually goes to heaven. At first, the idea angered me and seemed nothing short of wishful thinking; but after a few days it began to make a lot of sense. So I wrestled with the concept a few more months before finally ordering a book I found on the Tentmaker.org website titled “Hope Beyond Hell”.

I started reading the book on a college bus trip and I remember it seeming so revolutionary to my mind that I felt absolutely euphoric. I could look around at everyone else on that bus and believe that they too would be bound for heaven; it was truly an incredible thought. And the more I dug into the idea of Christian universalism, the more it continued to amaze me and ended up fostering a deep interest in theology in general.

My actual “call to ministry” was something I guess I’ve always felt in my Christian life, at various times and in varying degrees. As I stated earlier, I was big into evangelism at one point and even still I like to make people think about spiritual matters and ideas. I often entertained the idea of being a missionary or a youth pastor, though it was always kind of a secondary idea. People would often tell me things like “you’re smart, you should be a pastor” but I usually dismissed the idea as silly because I didn’t feel I was wise enough for such a role.

Some time passed though, and one day while earnestly praying and asking God what I should do with my life, the idea of minister came up and I felt strongly that it was something I was supposed to be involved in. I second guessed it a few times but God really began to show me how I already had a vision for the future of Christianity. He showed me that even though I have different ideas about some mainstream doctrines, that there was already an underground of ministers and churches breaking out from the norm. And that’s helped affirm things for me because I know this isn’t a battle I have to fight on my own and that I can be a part of something that really makes a Kingdom-minded difference.

As far as what I would do as a minister, I would like to basically help guide the next generation of Christians in emerging from fundamentalism. There are an increasing number of people disillusioned with church, Christianity and even religion/spirituality as a whole; this is tragic to me because there is such a foundational worth to those things. So I want to help people see that you don’t have to believe things like a never-ending place of punishment or that every word of the Bible is to be taken literally. I want to help people see that the Bible, regardless of what translation errors and ancient perceptions may exist, can be a tremendous tool in our search for meaning as humans. It is extremely useful for people in its function; which is to connect us with the divine force that crafted our very being.

I’d also like to either start a church or become involved with an established church that is universalist and open-minded in its theology. This church would be centered on God, Jesus and the Bible but would allow freedom to question ideas. It would not only respect but also celebrate the diversity of perspective and would seek to help us learn from one another. It would teach people the Christian tradition and inform it of its history, yet not claim to be “superior” to all other faiths and would leave room for personal interpretation. Ideally, this church would overall be big on outreach to the surrounding community, providing support, hope and the love of God to all those in need; rather than expending a bulk of resources on big buildings, staff salaries or flashy productions.

In conclusion, the words of Jesus in Luke 4:18-19 inspire me as a foundation for the ministry that I want to undertake: “The Spirit of the Lord is upon me, because he has anointed me to proclaim good news to the poor. He has sent me to proclaim liberty to the captives and recovering of sight to the blind, to set at liberty those who are oppressed, to proclaim the year of the Lord’s favor.