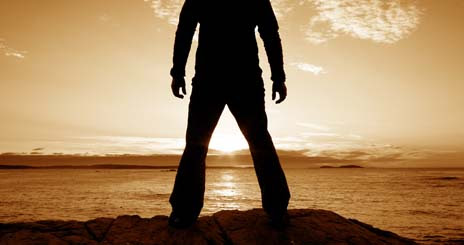 What in life truly matters? That's the question I've been thinking a lot about lately. Of course, there are so many ways to attempt to answer that and in life it seems to be an ongoing process of figuring out (or think we are figuring out) what is actually important and worth devoting ourselves to. Yet, I think it's all too rare that we revaluate those things or at least in my case.

I've really just been trying to step back whenever I'm angry or worried and just ask myself why that particular thing even matters or at least as greatly as I think that it does --it's been very eye-opening for me. Someone recently told me about how bad my new tattoo is going to look when I become old and wrinkly, and I thought to myself "why would care about that?" For one, I don't feel like I'm going to be overly concerned with my physical appearance when I'm eighty-something years old but I also may not even live to be old and wrinkly for all I know. So, why should I base my life decisions on a far off future that may not come?

Humanity seems to have such a gross obsession with the future. We're told to save money, go to college, get a good career, build credit, buy a house, etc. all so we can secure this thing called the future, because apparently the future that you're not guaranteed matters so much more than the present moment which you are currently experiencing. In our society, living for today is often deemed as reckless and irresponsible, because everything that matters comes tomorrow-- thats just so ridiculous to me.

I don't want to live recklessly or irresponsibly necessarily, but I don't think true happiness resides in "playing it safe", or following the rules based on an arbitrary set of morals and ideals that are bound to change over time and location. We have been taught that certain things  are important when more often than not it's just about our egos feeling a false sense of security while other egos control and manipulate us to their own selfish ends. We're taught that all sorts of things matter and will bring happiness when more often they bring never-ending dread and sadness because we cling so tightly to mental pictures of success. I often call it "the game", if you will.

The game is unspoken, but it is designed to make you jump through countless hoops and bust your ass to attain lasting contentment yet, ironically, contentment isn't really ever found or not for long. Now, religion is principally concerned with pointing out this game and beckons that we escape it, but often I think it just trades it for yet another game that is very similar. For example, we may detach ourselves from seeking worldly riches and satisfaction because someday in the future we will go to heaven, be cured of all troubles and we need to get as many other people on their way to heaven as possible and so on. The best is never here but always around the corner ---so, the mentality is virtually the same between some secular and some religious mindsets. Quite frankly, I don't feel like striving for a sense of bliss that has no real guarantee, be it in this life or the next.

I'm not saying that I want to live apathetically and without passion but simply that I want to live without fear --fear of failing, death, the future. Life is not meaningless to me, it's just difficult to say what anything amounts to in the grand scheme of the universal story. If anything means anything in the ultimate sense, I think it is much simpler than the elaborate mental and emotional labyrinths we have created for ourselves.

Posted by SavageSoto at 7:11 PM No comments:

Building my own spirituality

Last year, I wrote a post about how it was difficult to find spiritual direction or structure once you become detached from a particular religion. I still find this to be a true thing nearly a year later yet I think I have begun to find my way out of the darkness a bit (or I am simply enjoying the darkness, however you want to look at). Yet, there is much that has helped me through this process.

One of the things that has helped me is just giving myself the freedom to explore all the different spiritual ideas out there, as many of you know. I've slowly given myself permission to investigate and entertain all the things I felt I wasn't allowed to look in years past. I often can't make up my mind about the veracity of said things but the beauty of it is I don't feel I really have to either. I'm simply exploring and being in awe of what I find. And it is always really interesting to not only see where spiritual paradigms differ but also where they overlap. The overlap reaffirms my theory that all spiritual paradigms are really just attempting to describe and relate to the same thing ultimately. I went from thinking there was no more ground left to cover spirituality to feeling like there is too much ground to cover than I will ever get around to. I'm actually to the point now where I have more books I want to read and more rituals I want to experiment with than I do time to dedicate, which can be frustrating but also exciting at the same time.

Exploring all these various perspectives gives me the materials to build something of my own. Rather than passively accepting a ridged structure of spiritual beliefs and rituals, I have the chance to really create my own structure. After all, why the hell not? Who is to say those who constructed the spiritual structures before me necessarily knew any better than I do? Who is to say they had divine blueprints  to construct what they did?

Perhaps this method just resonates with me so well simply because I have always been creative by nature; I've never been content with just appreciating the art. I've always had to eventually make my own art, and now, my own "religion".  Interestingly, I've encountered more and more people that seem to be doing something similar. My feeling is this is not merely some crazy idea of mine, or a trend but a movement into the future in relation to how humanity comes to view spirituality and eventually, science and spirituality as tools describing the same phenomena.

Maybe the thing that has helped me most of all is realizing that the spiritual journey paradoxically starts and ends right here and now. The thought that we are ever far away from the Divine, or salvation or enlightenment is simply that--a thought and that thought can be released. Those things are all right here. Of course, there are various ways to open yourself up to that inner paradise (prayer, meditation, etc.) and explore the mystery of it all but it is always within us at the center of our being. Fear is really the only thing blocking that realization.

There is so much we can learn about and incorporate into our practice but ultimately I feel the spiritual journey is just about realizing that you already have the peace and fulfillment you seek, if you only accept it as so.

The Pyramid of Self (a theory) 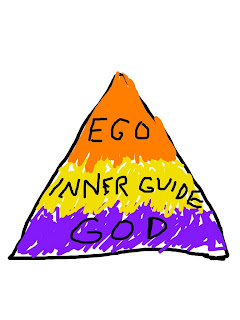 I drew this simple pyramid on my iPad as a way to visualize my current thoughts on what "we" actually are. My following explanation is a hodgepodge of ideas I've been reading about and my own personal reflection. I have no idea if any of it makes much sense as it's just a theory I'm putting together. Feel free to pick apart or provide your own thoughts, I would only ask that you try to see beyond the language used to communicate potential realities:

Ego - The most superficial and temporary part of ourselves yet the one we most commonly identify as "I". It see's itself and the physical body as one in the same, though it is not necessarily. It is the sum of individual biology and personal experiences and is concerned primarily with survival and personal satisfaction --though the ego's very nature is ironically often counterproductive to both of those ends. Spirituality is particularly concerned with overcoming or seeing through this aspect of the self.

Inner Guide (the Higher Self) - An extension or "face" of God that could be seen as a mediator between the ego and God. It is the part of ourselves that has perhaps eternally existed and reincarnated in different forms, if reincarnation is true. Having much more wisdom than the ego, it is always calling us to meet our highest potential on this plane of existence. One could say this is the "personal" extension of God which we can have an inner dialogue with (which may partially explain why there is so much disagreement on what God supposedly says). The more we peel back the ego, the more the higher self shines through.

God (the Ground of Being)- This is the part in which all that exists is inextricably connected. It's essence is pure energy and pure consciousness. To experience God is to experience the deepest core of our being which is simply an awareness that beneath the ego, and beneath even the higher self, we are all fundamentally one thing. The ego may have some awareness of God via the higher self, but often taints it with the ego's own thoughts, desires and traits to give divine validity to it's own selfish ends.

With the understanding of the God above, perhaps a more accurate visualization would be the following : 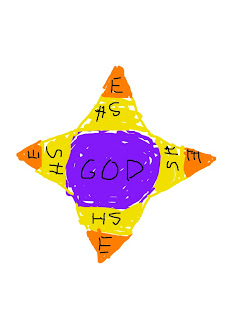 I realize the essential weakness in this theory is that I am working through the "ego" to postulate about these different levels of the self, but take it for what you will.