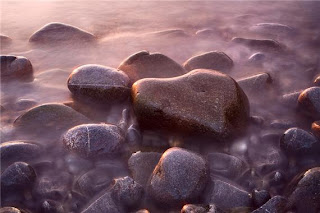 Not long ago I was having a conversation on the topic of "truth" in which I admitted that I thought that virtually anything I perceived to be true could, in fact, be incorrect. The person I was conversing with thus concluded that I had "given up on truth" and while I tried to press further into what the person meant by that exactly, it seemed that was their sign to give up talking to me so, I unfortunetly didn't get to explore that statement much.

From my perspective at least, my spiritual journey has always been about my hunger for what is true and aligning myself with that to the best of my ability. At the same time, my idea of what is true has obviously changed over the years and it seems the more fervently I try and nail down and define it, the more elusive it seems to be. In one of his books, Alan Watts uses the analogy of "trying to get the water of life into neat and permanent packages," which quite accurately describes my past attempts at trying to discover what the absolute truth of reality is.

So, in a sense, I'd say that person was actually correct in saying that I had given up on truth. I have given up on it in the sense of having the certainty that my beliefs about God and the universe are unquestionably true. That idea of truth is what seems to have gotten humanity in a lot of trouble throughout history and I find it to be incredibly unrealistic. One of the things I like to bring up is that various people of various faith traditions throughout history have all claimed exclusive rights to this idea of truth. Debates, stake burnings, wars and rumors of wars have all been had over people's certainty that they understood truth and that anyone who claimed different was wrong, if not plain evil and deceptive. So, whenever you claim to have the truth you inevitably have to do something with all the other truth claims that have been made especially those that seem to yield miraculous and/or positive results in people's lives. I find the more I come to understand about many of those who hold those differing claims, the less I judge them or their beliefs.

Various experiences and findings are used as evidence in supporting such claims on truth but they are nonetheless very subjective and never settle the issue for everybody. What I'm wondering though is what does a sensible person, who is genuinely interested in the truth, to make of all these claims and the various things used in support of them? How often do people actually investigate these differing claims and their support without some sort of dismissive, apologetic agenda that has made up their minds well before hand?

Why is it that when someone is convinced they have discovered spiritual truth and yet someone else shows their disagreement, it is so often assumed that the other party is merely refusing to see it? It's as if our perceptions of truth are like interestingly-shaped rocks that a person discovers and then proclaims to everyone how it's the greatest treasure. Some come to agree but they are always surprised when someone else doesn't see it as anything that great and insists that it is just simply a rock. The treasure-finder then assumes the person is refusing to see it or has not been "gifted" to do so, and thus react accordingly...either by trying harder to make them believe, dismissing them as fools or by having their head chopped off (which is still a modern reality in some places).

I'm thinking the above vision of truth does not work though and there may be a more sensible perspective. For me, truth is about embarking upon a personal journey where I experiment with different ideas and practices and discover what seems to work and what doesn't. To ask,"what is truth" is of little benefit if one is expecting a black and white, neat and packaged answer. The reason I say that is if there is such a thing as absolute truth regarding God and spirituality, it seems that it transcends anything we can say or think about it. Linguistics and symbology will faith the absolute truth every time. Understandably, that seems to be a frustrating idea to a lot of people but it need not be if they can learn to set aside their presumptions and soak in the mystery that is truth. The journey is best when we can find those interesting "rocks" and appreciate them aesthetically without bashing them over the head's of others in hope's they'll get it. I think we can celebrate our ideas and personal truth's without insisting they are the absolute truth and be open to better ideas coming our way to shape our understanding of truth over the course of our lives.
Posted by SavageSoto at 6:32 PM No comments:

I've been waiting awhile for this documentary to come out. I don't remember when I first heard about it's development but I know it had to be at least 2 years ago. Anyway, the documentary is centered around the idea of "Hell" particularly in Christianity and how many have come to question and even reject it. This topic is of considerably less interest to me anymore as I debated it into the ground and I don't confine my beliefs strictly to the Christian philosophical box any longer. Yet, it is a topic dear to me in the sense that it's what first caused me to question and ultimately explore my faith. The idea of Hell is what first got me to open up my mind to differing spiritual beliefs not only in Christianity but outside of it too. This blog started as a wrestling with the question of Hell essentially so, it seems worth mentioning my thoughts on it here.

First, I will say that Hellbound? was pretty well done. I think it's difficult to do a documentary on a religious topic correctly but director Kevin Miller did a good job in my opinion. The documentary seems focused on bringing to light the argument for Christian universalism but I feel the different camps are represented fairly and respectfully. Mark Driscoll and the Westboro Baptist church come off as various shades of crazy, but honestly I think they do that all by themselves in whatever capacity they show up in. Nobody needs to try and make them look nutty.

Second, I think Kevin Miller picked some great interviewees to include the infamous Westboro Baptists, Mark Driscoll, Ray Comfort and a random exorcist. William Paul Young (author of the Shack, which I reviewed awhile back), Brian McLaren, Gregory Boyd, Chad Holtz and Frank Schaeffer were also good picks. Robin Parry was definitely one of my favorites as his book, The Evangelical Universalist, had a big impact on me when I was studying the topic of Hell. The only interviewee I didn't care much for (besides the singer of GWAR) was Robert McKee, whom was an atheist arguing for the logic of eternal Hell, which was confusing in itself but I also just wasn't able to coherently put together the points he was articulating for some reason. I also think it would have been nice to see Rob Bell get interviewed for the film, though clips of him do appear and some of the interviewees mention him. In addition, Carlton Pearson is interviewed but it is very brief and only appears in the special features. It's a small gripe of course, but being that they are two former megachurch pastors that essentially made the topic of Christian universalism known to the media and public at large, I feel like they just warranted a little more attention than they recieved.

An unexpected surprise was the mention of Preterist eschatology, which is another one of those ideas in Christianity that until recently, wasn't something many people seemed to know about unless they went to school for theology or something. It fits in nicely with the discussion on Hell because it's an idea that really shifts your perspective on the concept just like the idea of Hell being nothing more than a state of conciousness in the here and now (I don't know if there's a fancy name for that view though).

One of my favorite things said in the movie was by Frank Shaeffer, whom I previously had never even heard of, "Even if you accept a tradition and say 'i'm going there for authority' it's still you, a fallible human being, making a decision to accept this as true". I think that is one of the most important points one can make about religion, particularly when one wants to be dogmatic about particular beliefs, books or institutions being of divine origin. You can say that something has the final word on what you believe but logically it seems inescapable that nothing or no one besides you has given that something the final word. And if you think someone else has chosen the wrong authority on matters of truth, what's there to say you haven't potentially done the same thing?

Anyway, there's a lot of stuff I could dive into here but for the sake of brevity and repressing my inner nerd, I will simply end on the importance of the particular topic this documentary is based on. First, I'll say that I do not think the importance lies in figuring out what a book, like the Bible, "actually" teaches or figuring out what the early followers of one single religion thought; although that is what many will inevitably reduce it to. On one level, I'd say the importance of questioning Hell is that it ultimately leads to a lot of other questions in regards to one's faith and can free people to make up their own minds as opposed to adhering strictly to one spiritual perspective. On a deeper level, the importance lies in the questions that I see as behind all spiritual thought to one degree or another: Who am I? Who are you and who is God? And how deep does the separation between those things go or is that separation merely an illusion? How we answer these questions will invariably impact how we perceive and treat others and also ourselves.
Posted by SavageSoto at 9:44 PM 1 comment: